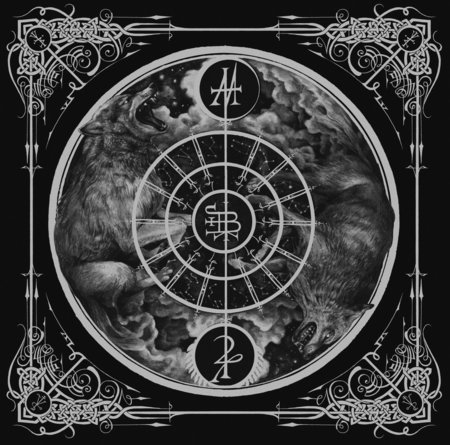 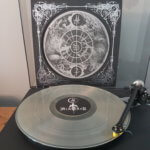 Two uncannily compatible forces of nature come together on this magnificent collaboration to deliver an immense, fully immersive experience accentuating the tininess and insignificance of mankind lost within the vastness of the endless cosmos, all life sure to perish and fade to nothing, hunted down and crushed to dust by the infinity of time and space. Existence not even a twinkle in the light of the stars that spawned us; all cursed to disappear, even the great creators of the cosmos themselves – the stars – destined to burn out eventually, long after humanity’s futile floundering and posturing has ceased.

Each act offers two lengthy interstellar conjurations. From Almyrkvi, the wondrous Icelandic enigma fronted by multi-instrumentalist Garðar S. Jónsson alongside his Sinmara and Slidhr associate Bjarni Einarsson on drums, the shimmering ‘Asomatous Grove’ opens proceedings in a magical, enchanting maelstrom of cosmic Blut Aus Nord worship, the song-writing and musicianship perfect, the music atmospheric and accessible yet disturbing and frightening. Almyrkvi has evolved into a stunning, extremely significant entity in its own right and the quality and quantity quotients remain reassuringly high through ‘Managarmr’. This is music that will fill you with wonder, take your breath away, with the ability to transport you to a timeless place if you close your eyes and let your imagination take over.

With each act effectively offering an MLP worth of material, there’s plenty here to get your teeth into (almost 43 minutes in total) and endless replay value to be enjoyed. Deep bass-, percussion- and chant-driven, ‘The Grand Nebula Pulse’ demonstrates once more why The Ruins Of Beverast deserves to be recognised as perhaps the greatest one-man musical act on the face of this soon-to-be-scorched planet. True to form, the inspired Alexander von Meilenwald delivers a masterclass of restraint and control, producing a mesmerising, infectious, crawling funereal hymn for the little stone on the outskirts of the multiverse(s). I find it amazing that one person can compose and perform music like this, making his vision a reality, almost invariably in a mind-blowing manner.

In the wake of this hypnotic dirge, ‘Hunters’ is faster and more frenzied and ominous, a swirling, all-engulfing storm of cosmic dust darkening the skies and signalling an end which is inevitable. Finally, a sombre, foreboding solo escorts us to oblivion, bringing the curtain down on a fascinating, multifaceted record that deserves to be absorbed and acknowledged not just within the extreme metal underground. But of course that isn’t going to happen.