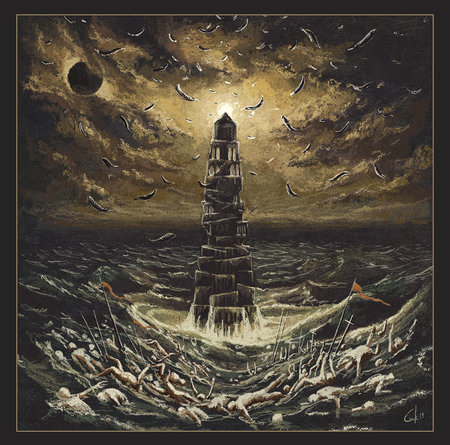 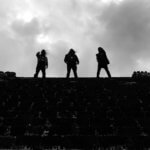 Diabolic Oath have crafted a monstrous maelstrom of suffocating, strangulating, all-consuming chaos on their debut full-length, ‘Profane Death Exodus’ – a traumatic and tormenting fusion of Death Metal and Black Metal that should garner approval from those who appreciate the work of horrific hybrids in the vein of Altarage, Portal, Vassafor, Abyssal, Malthusian, Mylingar and / or Adversarial. This is an unrelenting and violent attack from a mysterious trio sharing at least one member with Shroud Of The Heretic, every second of the 39 minutes vomited forth the aural equivalent of a devastating blow to the solar plexus.

The attack is merciless and constant, fretless strings cutting, garrotting; the terrifying triple vocal onslaught annihilating; inhuman, omni-limbed drumming pummelling, crushing, turning matter to dust and ashes. Buried deep beneath the barrage of naked hostility is a keen appreciation of doom, which lends the music a subtle, hideous sense of ominous atmosphere but, in truth, the only respite you are going to get from the vicious offensive is if you pass out momentarily or leave the room for a breather.

‘Profane Death Exodus’ represents glorious dark, uncompromising art of the highest calibre. With the passing of time, I’ve come to the realisation that nihilistic messages should be conveyed as ferociously and viciously as humanly possible. Diabolic Oath deliver on this and then some! If you are genuinely angry about something, then it’s vital to allow that rage become the central component of your work – not just in the lyrics but also the delivery. Why whisper dissent?

There is dissent and desolation in abundance on these odes to futility and death. Anguish, dismay, fury and contempt. Diabolic Oath are not happy with the state of things and who could blame them? The world is in a dark place right now and it’s becoming increasingly impossible to find a chink of light or solitary redeeming feature anywhere. In such hapless circumstances, the only logical strategy is to embrace the darkness.