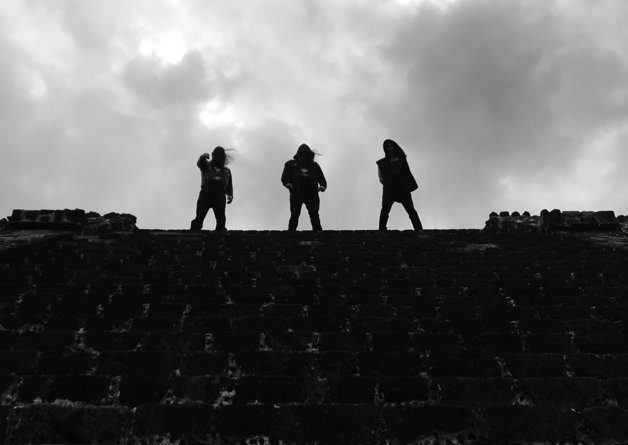 Battered and bruised by the seething maelstrom of ritualistic sonic chaos that is Diabolic Oath’s devastating debut album, I sought out the shadowy trio of twisted minds behind ‘Profane Death Exodus’ – Ominous Void, The Temple and Chthonian Conqueror – to further explore the genesis of this unprovoked outburst of unrelenting violence. 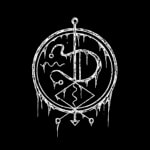 All-consuming chaos and sheer audial carnage reign supreme on ‘Profane Death Exodus’, which is an uncomfortable, jarring yet esoteric journey to the darkest, post-apocalyptic void. I get the distinct impression that with this particularly challenging and chaotic approach you are embracing the nothingness? Are nihilism, apathy, disillusionment and dejection / rejection at the core of your music? What other emotions / feelings are you attempting to convey?
[Ominous Void]: “Desolation, contempt, transcendence and arcane mysticism are common themes and moods woven in throughout ‘Profane Death Exodus’. A ritualistic approach towards the music we create is also very important to us. We attempt to draw the listener in, to feel the expressions and emotions we are presenting, and what we try to invoke or reveal though the songs we craft. All the ideas and philosophies were intentional and thought out. From the music, lyrics, artwork, the image and live setting, it all ties together for us.”

You have conjured the sound of Hell on Earth. Listening to the album, I can envision a world in ruins, nothing remaining but ashes and embers, smoke and dust. And dry bones. The scorched terrain depicted in a Mad Max movie, perhaps, where mankind has succeeded in fucking things up – an outcome which seems increasingly inevitable as we look at the state of the planet right now, cities in flames, dead bodies piling up (allegedly), protests on the streets nightly, ignorance unbound, gullible fools with too much airtime, while our (corrupt, self-serving) leaders offer only cold disdain and we stumble blindly from one crisis to another. It’s not really a good time to be here?
[The Temple]: “That’s one way to put it into words! Mad Max, Bestial Warlust, Rampage, Vomitor and the Australian sound in general had a huge influence on me growing up. Apocalyptic facets of that energy work well with the sound on ‘Profane Death Exodus’; overwhelming infernal force, raging demonic battles in spiritual realms, traversing the afterworld, etc. The album contains no direct emphasis on human affairs but, because of its mystical and ambiguous nature, may absolutely result in the speculations you mentioned.”

How surreal have things been in Portland these past few weeks / months? Social distancing and social unrest at the same time – you couldn’t make it up!
[Ominous Void]: “Portland has been surreal the past few months. The feeling of the unknown is overwhelming at times. Virus numbers are steadily rising and downtown Portland looks like a war zone. I think it’s safe to say anxiety levels are very high. We took a necessary break from the band, but have recently reconvened with writing and rehearsing. Three new songs have been written, as well as recording plans, while two Canadian festival gigs and a late summer 2021 west coast tour are all in the works … with everything considering of course.” 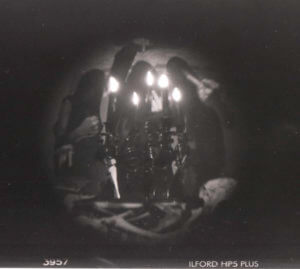 The songs sound somehow spontaneous and improvised, imbued with a genuinely organic feel. Is this the case or have you crafted the music carefully to achieve this effect? In other words, is it an avalanche of untamed, impulsive free-form ferocity erupting through the speakers or controlled, carefully-placed chaos? Also, how difficult is it for the three band members to get on the same wavelength to simultaneously channel such merciless, crushing annihilation?
[The Temple]: “The songs are very spontaneous for the most part. Whatever aura or force we’re feeling at the time is the direction we head in, with an emphasis on simplicity. Any extraneous notions or ambitions are rejected. Once the basic structure has more or less been felt out, then the fine detail and ornamentation writes itself. The formative riffs can end up significantly warped by the time writing is complete. While the three of us do have aesthetic differences, there is a shared understanding of flow and feel that can’t really be quantified in words.”

At any stage during composition or recording did you consider including some calmer passages to offer respite and variety, serving as a counterpoint to the maelstrom, or were you focused solely from the get-go on creating a hostile, harrowing, forlorn environment? There’s very fleeting ambience in there but mostly ‘Profane Death Exodus’ pummels…
[Chthonian Conqueror]: “The idea was to suffocate. Our live performances possess the same intent, as many who have seen us live have remarked and witnessed. The idea is unyielding ferocity. Peaceful interludes do not reflect this. However, that is not to say moving forward we would not implement them. It really comes down to what fits the overall presentation. But nothing is off the table here.”

I’m finding myself drawn more and more towards the heavier, more violent aspects of Black / Death Metal. It seems to me that as this cross-pollination evolves, the music should be as disturbing, unsettling and vicious as humanly possible. I want to hear naked aggression – Revenge, Vassafor, Portal, Teitanblood, Nyogthaeblisz, Mylingar. There’s something refreshing about the honesty of this approach and there is subtle rhythm to be found in violence. Is destruction a good thing?
[The Temple]: “Teitanblood, Portal and Revenge have been mainstays in our rotation for a long time. In some ways, you’re already dealing with a caricature of sound by running instruments through an amplifier with distortion, guttural vocals, etc. The ones who wield that raw power without trying to tame it get the best results, and maybe also the subtle rhythm you’re referring to. This is all a personal opinion of course. How can you call your music truly violent and extreme if it’s corrupted and weakened by intellectual nuance? Pure rage is unaffected by reason.” 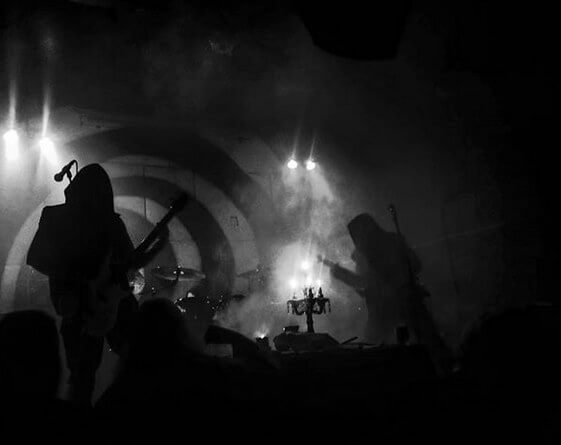 The frenetic nature of proceedings is highly impressive. Jagged riffs, permabass, out-of-control drums hammering out a crazed mantra and those wicked triple vocals, diabolical and delirious. With so much going on, in the wrong hands, the end result could have been a hapless mess. How complex and challenging was the mixing and mastering of this album? What engineer did you enlist and why?
[The Temple]: “There is a lot going on, and it would have been very difficult to produce this album if it was left in the hands of one person alone. For a huge drum sound, who better to have record your drums than an actual drummer? So we went with local engineer Charlie Koryn at Underworld / Toadhouse for those big, pummelling natural tones. We recorded and prepared the rest of the material ourselves; still tedious, but easier and faster than working with a third party. We capped off recording with Charlie again for reamping the stringed instruments. For mixing and mastering, we enlisted Xav at Tehom Productions. Not only were we impressed with his work with Malthusian, Phobocosm and Gevurah, but we’ve also toured together, so he’s very familiar with our live performances and just has the right ear for this material.”

Do you have ambitions to take your music into a live setting when conditions change and some sort of normal abnormality returns? Again, I’m assuming it might be difficult to reproduce these songs on stage but is this a challenge you would welcome? Ultimately, this style of ritualistic, occult darkness can really come into its own when performed live…
[Chthonian Conqueror]: “Haha, normal abnormality – I like it. We have already played a myriad of shows in the Pacific Northwest and would love nothing more than to return to this. Reproducing the songs has never been a challenge for us, as we would never seek to put something on record that we could not replicate in a live setting. We used to fuck with samples live, but this quickly got phased out for a more aggressive and suffocating approach. Personally I find high energy key to a live show, so we try to manifest that as best we can and maintain it throughout our set.” 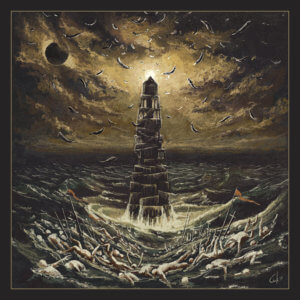 What is the painting on the cover of the album? Was it an existing picture or one you commissioned? What does this image represent to you and how does it tie in with the overall theme of the album (assuming there is one)?
[Chthonian Conqueror]: “The cover was a collaboration between us and Misanthropic Illustrations. If you are not familiar, I highly, highly recommend looking into his work. We drew a rough sketch and he turned our feeble scratches into a masterpiece (in my humble opinion, of course). For representation I would refer you to The Tower card of the Tarot. At its most basic, it is a signal for great change, and I would encourage you to look into the mysteries of the card for deeper meaning intended. At its most basic, the cover is an image of power and death, very large themes throughout our work. Whether these two forces work together or apart is for you to decide, but I will remain vague regarding its deeper meanings to the work so as to not tarnish anything one would take away on their own.”

For now at least, the identities of the members of Diabolic Oath remain concealed behind pseudonyms – Chthonian Conqueror, Ominous Void and The Temple. This is a common approach in underground Black / Death Metal and it adds to the mystique. Why did you decide to go down this route? (Personally, I’d prefer as much acclaim and credit as possible! Although I assume it’s not a well-guarded secret considering your ties to other bands – not to mention the fact that privacy is an illusion in the modern age, where cell phones, tvs or maybe even your beloved hi-fi amp can be accessed surreptitiously and used as spying devices.)
[Chthonian Conqueror]: “Privacy is an Illusion! Well said. The pseudonyms serve twofold: firstly, to make it about the music, and not its creators. The riffs come first. The riffs are why we are here, and why we hope others will listen. Not because it’s Jimmy Jim Jimmerson’s new band, not because it’s a close friend’s band, but because you enjoy the riffs. At this level, the pseudonyms are a balancing point to hopefully attract listeners who enjoy the music for the music, not its creators. I like to think they add to the atmosphere we strive to produce as well.
“The second service is that it is the way of the artists before us. It is a tradition of those who have inspired us in Black Metal, Death Metal, Doom, Grind, etc., when the music used to be dangerous and their identities reflected this. We would like our identities to reflect our sound and we felt this was the path to go. Privacy would be nice, but it doesn’t take more than a few clicks around Metal Archives to find who we are so, those who must know, I’m sure already do…
“A great thanks for your time, and I hope you enjoy ‘Profane Death Exodus’, and what is to come after.”

Photo credits: band on pyramid by A.L; sigil and logo by Connie at IconArtistry; candelabra by Scott King; live at the Twilight by R.A.; ‘Profane Death Exodus’ cover by Misanthropic.